To Eat or Not to Eat? Feeding and Growth Strategies in Neonatal Lake Erie Watersnakes | Ohio Sea Grant

Early growth has major impacts on life characteristics such as survival and reproduction in vertebrate taxa. Consequently, most New World natricine snakes begin feeding and growing immediately after birth and can reach sexual maturity by their second year. Previous studies of the demography, diet, and behavior of the Lake Erie Watersnake (Nerodia sipedon insularum) have shown that this natricine differs by growing more slowly and delaying maturity until the third or fourth year. A plot of snout-vent-length vs. day of year for the youngest age class suggests there is no growth in the period preceding the snakes’ first hibernation, and prey has never been recovered from a neonate in the field. This suggests that in contrast to other natricines, Lake Erie Watersnakes delay feeding and growth until after emergence from their first hibernation. I investigated this delayed feeding in three parts by performing feeding trials with pre- and post-hibernation neonates, continuing field prey studies, and quantifying energy reserves available to young snakes in the form of yolks and fat bodies. For the feeding trials, binary logistic regression analysis detected a significant positive relationship between age of neonate and probability of feeding. This was reinforced by a sharp increase in field prey consumption by post-hibernation neonates. Comparison of fat reserves revealed that Lake Erie Watersnakes have significantly larger combined yolks and fat bodies than other neonatal natricines, suggesting a possible mechanism for delaying growth and feeding until after the first hibernation. 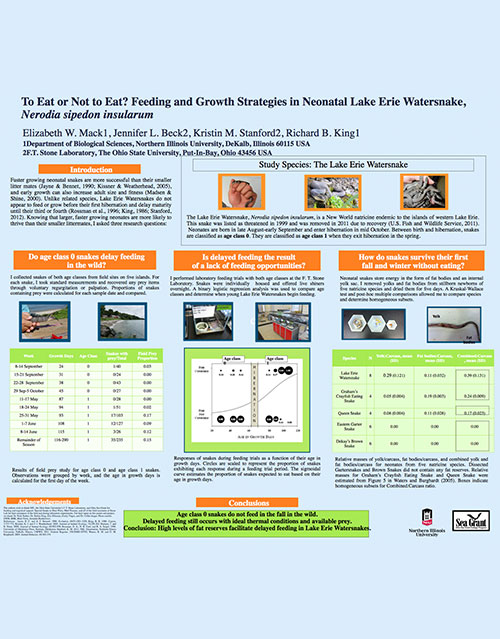