Gene Diversification of an Emerging Pathogen: A Decade of Mutation in a novel Fish Viral Hemorrhagic Septicemia (VHS) substrain since its first appearance in the Laurentian Great Lakes | Ohio Sea Grant

“Viral Hemorrhagic Septicemia virus (VHSv) is an RNA rhabdovirus that causes one of the world’s most serious fish diseases, infecting >80 species across the Northern Hemisphere. A novel and virulent substrain, IVb, first appeared in the Laurentian Great Lakes about a decade ago, resulting in massive fish kills, rapid spread, and genetic diversification. We analyzed temporal and spatial mutational patterns in the non-virion (Nv), glycoprotein (G), phosphoprotein (P), and matrix (M) genes. Our results show the Nv-gene has been evolving the fastest, with the G-gene second fastest. P- and M- genes are evolutionarily conserved and display slower rates of change. Samples from Lakes Erie and Ontario contained the greatest haplotype diversity. Since the 2006 outbreak, variants have increased in number, perhaps in response to fish populations developing resistance. Rapid evolutionary differentiation may allow new variants to evade fish host recognition and immune responses, facilitating persistence along with geographic expansion.” 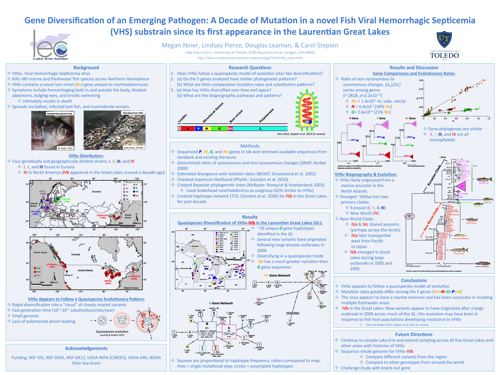